(History of the marque.) 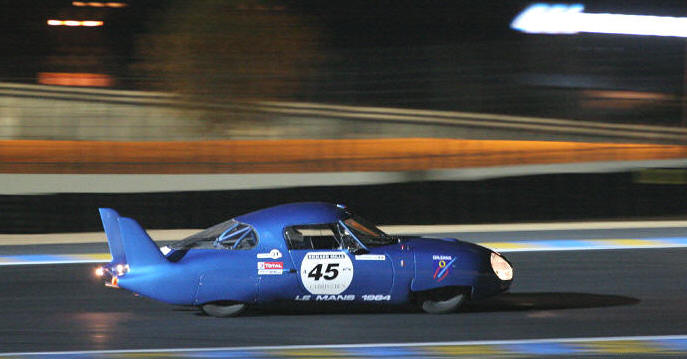 The CD LM64 #01 at full speed in a recent Historic race : a mechanical dream.

The Le Mans Prototypes:  the elite of classic race cars.

The CD offered for sale is part of the Autodrome Collection. This mythical car, with its unbeleivable shapes is true and alive ...

During the fifties and the sixities, the 24 Hours of Le Mans used to mean much more than today : it was not a media and marketing business, but an absolute dream that only a handful of heroes could achieve... Those Vingt-Quatre Heures (24 Hours) used to be the toughest challenge that a car manufacturer could take. Designing and building a car for Le Mans was an incredible adventure.

All the most famous marques had to race at Le Mans : Bentley, Jaguar, Maserati, Ferrari, Aston-Martin, Lotus, Ford, Matra, Porsche... The scary speed records reached in the Hunaudières straight, still intact in the sixties, have fascinated the entire world, and the ultra-aerodynamic shapes of the best prototypes enabled their drivers to go beyond all limits: 250 kph for the clever, ultra-light CDs, 308 kph for the Maserati tipo 151/3, 380 for the Porsche 917 LH, ad even 405 kph for the French Peugeot-powered WM ...

The CD were part of this bunch of "monster cars" uniquely designed for speed and victory, such as the Jaguar Type C and D, the Aston-Martin DBR1, the Ferrari Testa Rossa, 250 P, the Maserati 151, the Ford GT40, the Porsche 917, and many others. Their record-breaking Cx (air penetration coefficient) of the CD-Panhard was as low as 0,12 - never equalled since then - and combined with a 560 kg weight, enabled record lap time swith only a one-litre engine.

Only two CDs LM64 have been built, specially for the famous endurance race.

The history of this LP64 chassis 01 for sale is well known. It has remained about fifteen years in the hands of the manufacturer, before being sold to a French collector. It then became the property of another enthusiast and expert of the marque, who decided the restoration of certain parts  - without deviating from the authenticity and integrity - . This work was entrusted to EPAF (see picture below), created by former experts and technicians of Matra-Sports.

The structure is a rigid and light steel beam, supporting a Panhard twin-cylinder that has been tuned for performance and reliability (distribution gear in aluminium, forged pistons, double-ignition). Independent suspensions are associated with inboard disc brakes suspended at the front and drums at the rear.

It should be noted that this CD is the only one still fitted with its original five-gear ZF box - overhauled and in perfect condition -, the ultra-long fifth gear for Le Mans high-speed is also available. The experimental tires (135x14) specifically developped by Michelin in 1964 are available, but for safety reasons the wheels are now fitted with "soft" Dunlop X-AS FF. Similarly, the period springs and shock absorbers have been replaced (but are still available) by recent adjustable devices. The gasoline tank is the original one, made of riveted Aluminum, filled for safety reasons, by a race-legal foam.

The cockpit is totally original, with the mechanical rev counter, and all instruments in running order. In order to meet the standards of the historical competitions, the safety roll-bar as well as the safety harness-type belt (four points) have been recently installed.

The glass fibre body, as described below in detail, is the result of extremely advanced theoretical studies, relating in particular to the interaction bewteen the dynamic behavior of the frame and the aerodynamics.

With this car, are also provided certain replacement parts, such as a windshield, its fabrication mould, and, on request, an additional engine can also be provided.

Ready to run... but also road-legal for "out-of-this-world" driving experience.

This CD is an authentic Le Mans prototype, preserved in perfect condition, and can be the star of a great collection. It will also offer immense satisfactions and excitement for the driver, either in Historic Races, or on the road. The car is in compliance with current FIA regulations, and also legally registered for road use.

Let's remind that the 1964 year is one of the best for the 24 Hours of Le Mans : that year, the "Ford the Giant" challenged Ferrari for the first time... At a period when, after four successive victories at le Mans, Ferrari was the most admired racing car maufacturer in the world. This first confrontation, strongly publicised by Ford,  was the focus of the whole world, and 300.000 spectators gathered around the Le Mans track.

The V8-powered Ford GT 40 had been designed - for the first time in history - based on computer programs, and their futuristic shapes draw enormous attention. Will the Italian genius Enzo Ferrari resist the overwhelming "dollar-powered" Ford ?

Ferrari won again, and it took two more years before Ford could finally win in 1966. 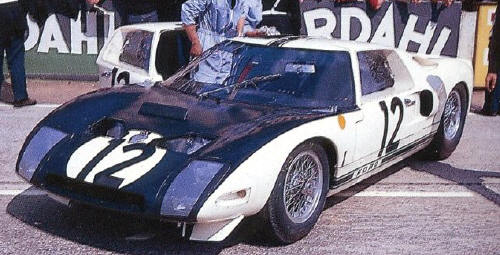 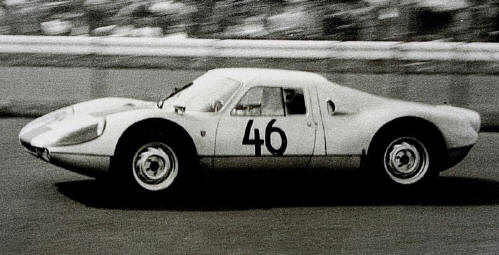 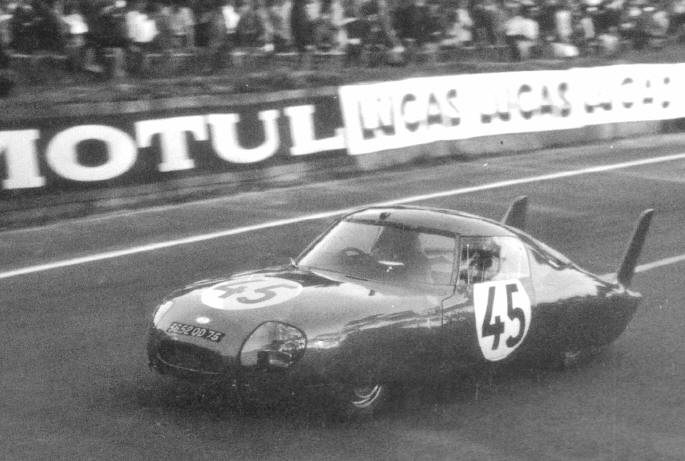 The leading edge of modern aerodynamics.

The extremely complex studies conducted for the design and construction of the CD included high-level mathematic calculations about the interaction between the air flows, the cross-wind effects, the suspension flexibility, and many other parameters leading to a whole new conception of the aerodynamic science for racing cars development. The famous rear fins were developped following very advanced theories, and enable the car to combine an extremely low drag and a high stability at full speed.

The CD of Le Mans still represent today, together with thePorsche 917 LH ( "Long Heck" ) - designed in collaboration with CD - a major step in the History of the "24 Hours" but also in the History of racing cars in general. A few years after, due to serious accidents in the Hunaudières straight, the race track was modified to ban ultra-high speeds, and putting an end to a fabulous era of legendary hand-made prototypes, and opening the computer-designed racing car period. 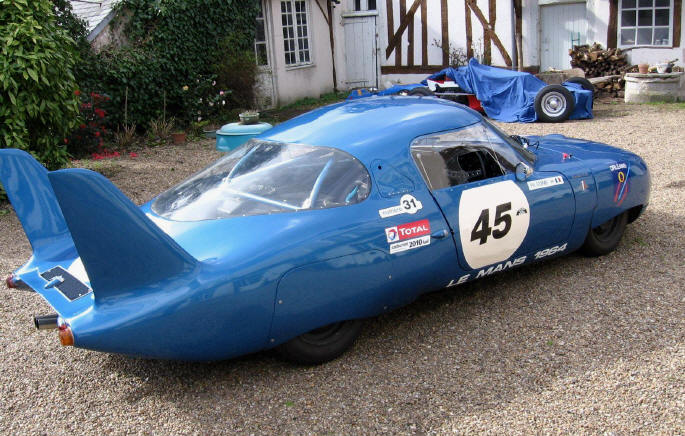 One of the most beautiful racing cars in the History. 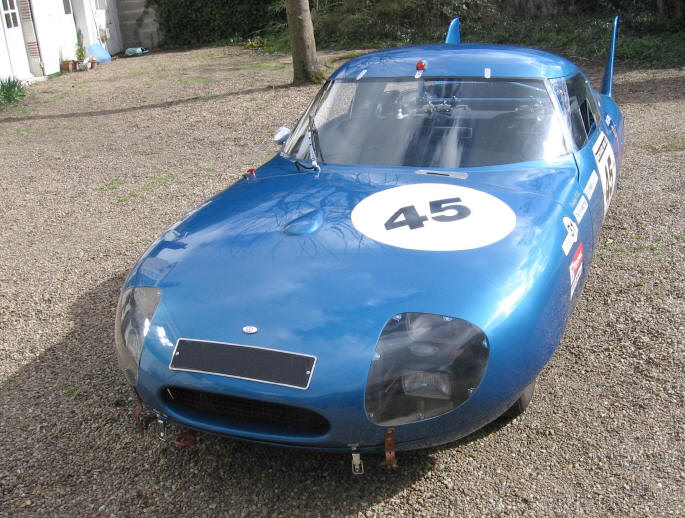 A daring concept, associated with innovative theories about aerodynamics produced an incredible machine,

combining science and art : indeed the CD is a work of Art as well as a technological masterpiece. 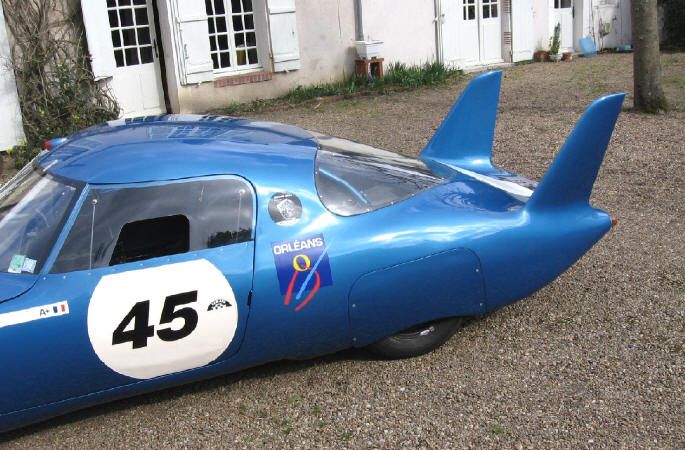 The famous signature of the CD, the rear fins, remain today a source of fascination, as much as the Chaparral wings...

The Dawn of a new era.

It is important to observe that this CD-Panhard opened a new era in racing cars : until the beginning of the sixties, engine and chassis were the key resource to win, whilst aerodynamics was seen as merely a way to decrease air ressistance. But in the modern era, aerodynamics became essentiel and more particularly its interaction with road-handling, suspensions, down-force, stability, and any recent racing car takes inspiration in these early developments, when ground effect was put in practice for the very first time (see picture below)...

One understands better this irreversible change and the birth of the "modern" sports cars by looking at the  Chaparral 2E and 2F with their wing directly linked to the wheels, followed by the 2J with its aspiration device, the Lotus 78 and 79, systematically taking advantage of the ground effect pioneered by CD, or even the most recent Formula 1 and prototypes, which are designed from the first sketch with aerodynamics and its interaction on suspension and chassis, in mind.. 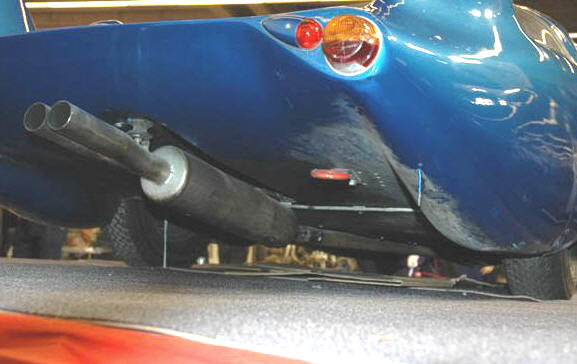 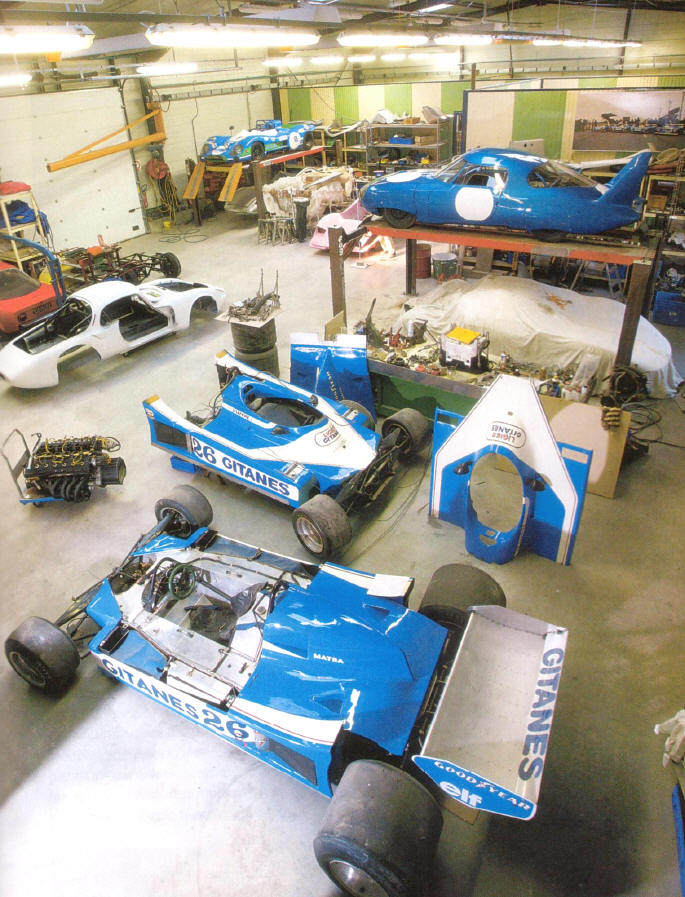 The high-tech EPAF experts have restored this CD, together Matra F1, and other celebrities. 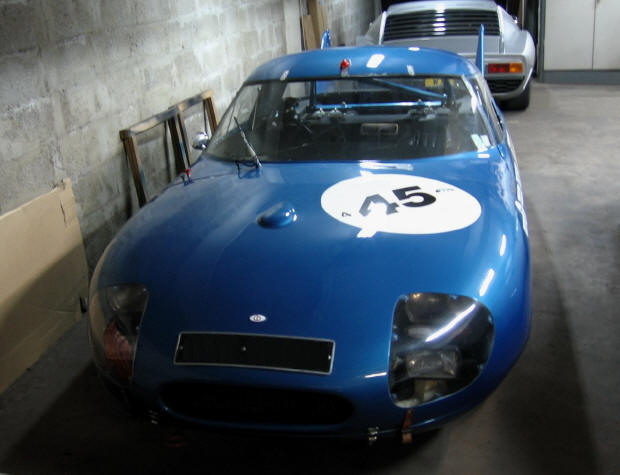 The 1964 CD 01 prototype is kept safely in one of our garages, together with the world-famous "one-off" Miura SVJ Spider...(now sold)

Panhard was, for half a century, one of the leading road and sports car manufacturer ; with over twenty Grand Prix wins, and advanced road models like the drop-tear shaped Dynavia, or the two-door coupé Panhard 24. Specialising in innovative, high-tech solutions, Panhard also used - like Voisin -  valveless engines (Knight patent). 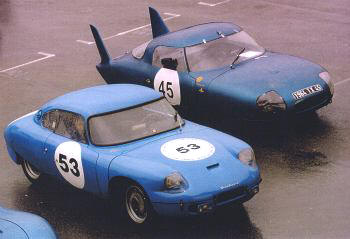 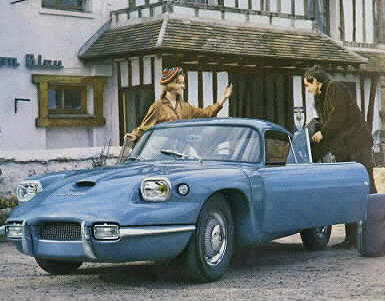 Charles Deutsch was one of the best Automotive Engineers, with degrees from all the best Universities and Schools (Polytechnique, Mines, Ponts et Chaussées et Ecole Supérieure d'Electricité). He founded with René Bonnet the famous DB marque, winning many races including the Energy-Challenge at Le Mans. 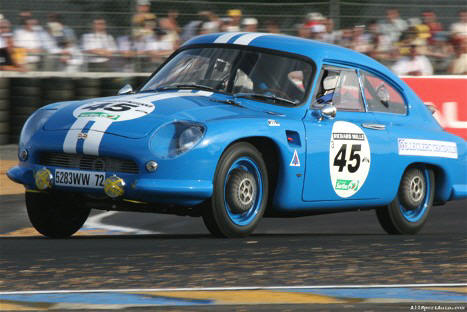 A Formula 1 was developped in by Charles Deutsch in 1955 but the super-charged 850 cc Panhard coud not really make it, in front of much bigger aspirated engines.

the DB Formula 1 designed by Charles Deutsch and René Bonnet.

In 1962 the Panhard-CD scored rearkable results at the 24 Hours of Le Mans 1962: 16th overall, and winner of the Energy-Challenge, beating the René Bonnet, in spite of their last generation Renault Gordini twin-Cam engine.

In 1963, the new CD, based on a DKW chassis, crashed unfortunately very early in the race. 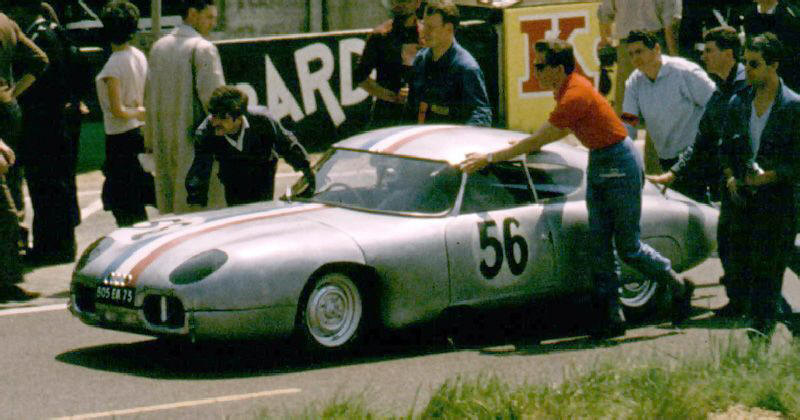 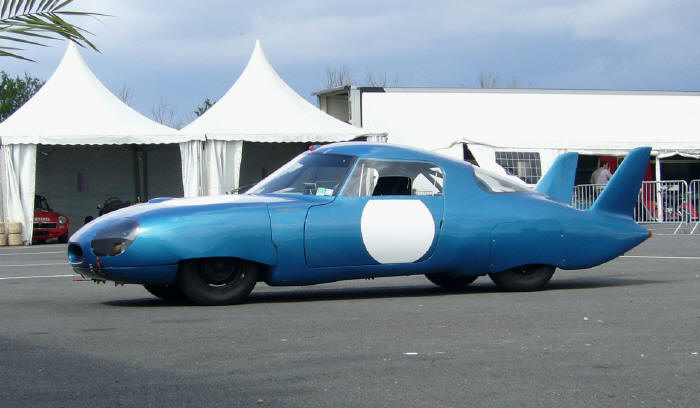